The Origin of the Word Agpeya 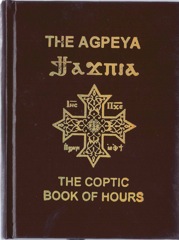 The word, Agpeya, is a Coptic (ancient Egyptian) word meaning “Book of Hours.” It is based on the Coptic root word, ti agp, which means "hour".

The Book of Hours

The Agpeya is primarily used by the Coptic Orthodox Church. It contains prayers for seven different hours to be said throughout the day. The hours are chronologically laid out, each containing a theme corresponding to events in the life of our Lord Jesus Christ. Each hour is composed of an introduction which includes the Lord’s Prayer, the Prayer of Thanksgiving, and Psalm 50. It is followed by various Psalms, an excerpt from the Holy Gospel, and Litanies. Lord Have Mercy is then chanted 41 times (representing the 39 lashes Christ received before the crucifixion, plus one for the spear in His side, plus one for the crown of thorns), followed by several other prayers and a conclusion.

When do we Read the Agpeya?

The Agpeya is read throughout the day and in many situations. The hours of the day start from sunrise and end at sunset. The morning prayer (Prime), which corresponds to 6 a.m., is said upon waking up in the morning or after the Midnight praise the previous night. The Terce (9 a.m.) and Sext (noon) hours are prayed before each liturgy during the Offering of Incense. The None (3 p.m.) hour is also read during fasting days. Vespers (sunset) and Compline (9 p.m.) are read in the early evening and before bedtime, respectively. and are both read before the Liturgy during the Lent and the fast of Nineveh. The Midnight hour is read just before the Midnight Praise. The Veil hour is reserved for priests, monks and bishops.