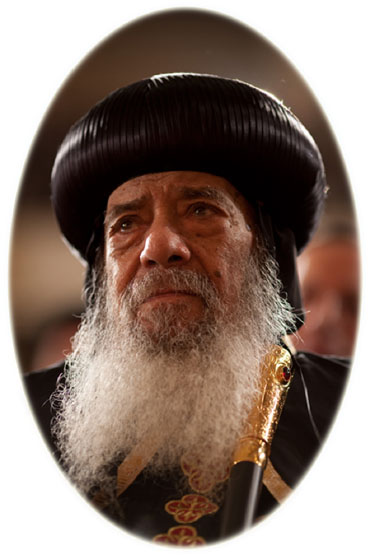 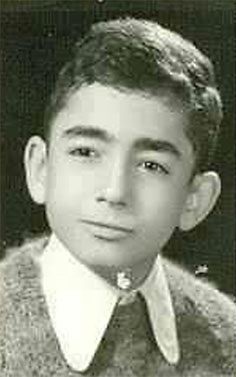 Nazeer Gayed Roufail was born on August 3, 1923 in the village of Salaam, in Upper Egypt. He was the youngest of a family of eight children. Nazeer's mother died shortly after his birth. He was raised by his older brother, Raphael, in Damanhur in Lower Egypt, where he attended a Coptic Elementary School. Soon after, he studied at the American Middle School in Banha. He then moved to Shubra, a suburb of Cairo, where he enrolled at the Faith Senior Secondary (high school).

In 1946, while still in his final year of undergraduate studies, he was allowed to enroll in the evening classes at the Coptic Theological Seminary usually open only to University graduates but the dean of the Seminary, Archdeacon Habib Girgis (d. 1951), made an exception in the case of Nazeer. The Personality of Habib Girgis was instrumental in shaping that of the future Pope, and Pope Shenouda always spoke highly of Habib Girgis.

Nazeer graduated from Cairo University with a BA in History in 1947. After graduation, he completed his military service as dux (top of group), and began work as a teacher of English, History and Social Sciences in a high school in Cairo.

Meanwhile, he attended graduate courses in Archaeology and Classics at Cairo University specializing in the History of Ancient Egypt and Islamic Egypt. He worked as a high school English and Social Studies teacher by day, and attended classes at the Coptic Theological Seminary by night. Upon graduation from the seminary in 1949, he was appointed to teach New Testament and Old Testament Studies at the Seminary. In the same year, he became the Editor‐in‐Chief of the Sunday School Monthly Magazine. In 1950 Nazeer resigned from secular employment to take up a full‐time lecturing position at the Seminary.

In 1952 he was elected member of the Egyptian Journal Syndicate. In 1953, he was appointed a lecturer at the Monastic College in Helwan, offering courses in Theology, and in the same year he began his dialogue with Jehovah's Witnesses, writing articles about their beliefs in the Sunday School Magazine.

Nazeer with others labored for several years to establish a strong Sunday School and youth group at St Anthony's Church in Shubra. His ministry produced many devoted servants, who began establishing youth groups in neighboring parishes.

An avid reader, he was a keen student of languages and a man of vast ecumenical insights. He spoke fluent Arabic, English, Coptic and French, and read Greek, Latin and Amharic.

On July 18, 1954, Nazeer joined the monastic life at the Syrian Monastery of the Ever‐Virgin Mary the Theotokos in Scetes in the Nitrian Desert (Western desert in Egypt). He was given the name of Father Antonios el‐Syriani (Anthony the Syrian). From 1956 to 1962, he lived as a hermit in a cave about seven miles from the monastery, dedicating his time to meditation, prayer, and asceticism.

On Aug 31, 1958, he was ordained as priest by the Late Bishop Theophilus, then abbot of St Mary Monastery (Syrian Monastery).

Antonios el‐Syriani was among the candidates nominated for the papal throne in 1959, but at that time, Pope Cyril VI was chosen for the post.

On September 30, 1962, Pope Cyril VI appointed him to the bishopric of Christian Education and as Dean of the Coptic Orthodox Theological Seminary, and renamed him Shenouda in honor of the most renowned scholar and writer in Coptic, Archimandrite. Under Bishop Shenouda's leadership, the number of students at the Coptic Orthodox Theological Seminary tripled.

He was enthroned as Pope Shenouda III, the 117th Pope of Alexandria and patriarch of the See of St. Mark on November 14, 1971, nearly nine months after the death of Pope Cyril VI of Alexandria. He was the third Alexandrian Patriarch to take the name Shenouda; his namesakes were Shenouda I (859–880) and Shenouda II (1047–1077).

Less than one year after becoming Pope of the Church of Alexandria, in October 1972, Pope Shenouda visited the Ecumenical Patriarch of Constantinople and the Pope of Rome, becoming the first Alexandrian Pope to do so since the Christological schism of the Council of Chalcedon in 451 CE.

In May 1973, he penned a Christological statement that was agreed upon with the Roman Catholic Church and the Oriental and Eastern Orthodox Churches on the Nature of Christ, in a step towards settling the 15‐ century‐old dispute of 451 and moving towards Christian unity. On 10 May 1973, he celebrated the return by the Roman Catholic Church of part of the relics of St. Athanasius of Alexandria. From 25 to 30 September 1974 he went on a pastoral trip to visit the Ethiopian Church during the reign of Emperor Haile Selassie of Ethiopia.

Between April 14 and May 23 1974, he became the first Archbishop of Alexandria to visit North America when he visited the USA and Canada.

Pope for all Egyptians 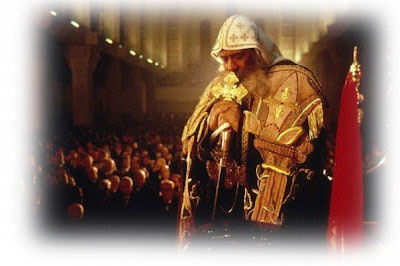 Ten years into his papacy, in 1981, Pope Shenouda III had famously fallen out with President Anwar Sadat of Egypt. The relationship between the two men deteriorated due to several reasons. President Sadat was seen by Shenouda as becoming increasingly dictatorial following his acclaim in the international arena for the Peace accord with Israel. In September 1981, President Sadat rescinded the presidential decree of 1971 recognizing Bishop Shenouda as Pope of Alexandria. Pope Shenouda was banished by Sadat to an ancient desert monastery; however, the Christians of Egypt continued to view Pope Shenouda as their only leader, and he continued to conduct his duties from his desert monastery. Ecclesiastically, Sadat's decision was of no value. Administratively, Pope Shenouda was confined to a monastery. However, Sadat was assassinated a month later, on 6 October 1981, by Islamic extremists, and in January 1985 Pope Shenouda was fully reinstated by Sadat's successor, Hosni Mubarak.

Pope Shenouda III struggled for his persecuted people on many fronts including against successive Egyptian Governments as well as against the rise of militant Islam. He was known to be a very patriotic character and loved by all Egyptians, regardless of their religion.

Relations with other churches

Pope Shenouda III was well known for his deep commitment to ecumenism. He believed that Christian unity was a matter of faith rather than of jurisdiction. In 1973, Pope Shenouda III became the first Coptic Orthodox Pope of Alexandria to meet the Pope of Rome in over 1500 years. In this visit, Pope Shenouda III and Pope Paul VI signed a common declaration on the issue of Christology and agreed to further discussions on Christian. There were also dialogues with various Protestant churches worldwide.

In an address he gave at an ecumenical forum during the International Week of Prayer in 1974, he declared, "The whole Christian world is anxious to see the church unite. Christian people, being fed up with divisions, are pushing their church leaders to do something about church unity and I am sure that the Holy Spirit is inspiring us.”

In 2000, Pope Shenouda III was awarded the UNESCO‐Madanjeet Singh Prize for the Promotion of Tolerance and Non‐Violence by UNESCO Director‐ General Koichiro Matsuura on the recommendation of an international jury. The award was "for promoting exchange and understanding between Christianity and Islam in today's Middle East and his deep concern to pursue dialogue with all the great religious faiths and his major role in forging ecumenical links with all other members of the Christian family throughout the planet.

His Holiness also opened the inaugural congress session on September 9, 1989. 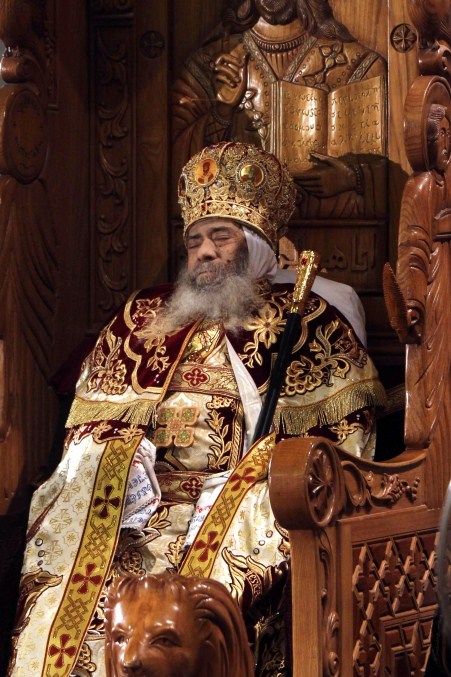 A New St. in Heaven

Pope Shenouda III died on March 17, 2012 of lung and liver complications at his official residence shortly after returning from medical treatment abroad. The funeral took place following three days of laying in state. On March 20th, he was buried at the Monastery of St. Pishoy in Wadi el‐Natrun, in accordance with his wishes.

Political and religious reactions to his death came from across the Egyptian spectrum and internationally:

Secretary of State Hillary Clinton expressed her condolences on behalf of the United States to the Egyptian people and said: "As we reflect on his life and legacy, we reaffirm our support to the future peace and prosperity of Egypt. Our thoughts and prayers are with the Egyptian people and all those who mourn Pope Shenouda III."

May the Blessings of Pope Shenouda III be with us all Amen.