"We give no offense in anything, that our ministry may not be blamed. But in all things we commend ourselves as ministers of God: in much patience, in tribulations, in needs, in distresses, in stripes, in imprisonments, in tumults, in labors, in sleeplessness, in fasting; by purity, by knowledge, by longsuffering, by kindness, by the Holy Spirit, by sincere love, by the word of truth, by the power of God, by the armor of righteousness on the right hand and on the left, by honor and dishonor, by evil report and good report; as deceivers, and yet true; as unknown, and yet well known; as dying, and behold we live; as chastened, and yet not killed; as sorrowful, yet always rejoicing; as poor, yet making many rich; as having nothing, and yet possessing all things." (2 Corinthians 6:3-10) 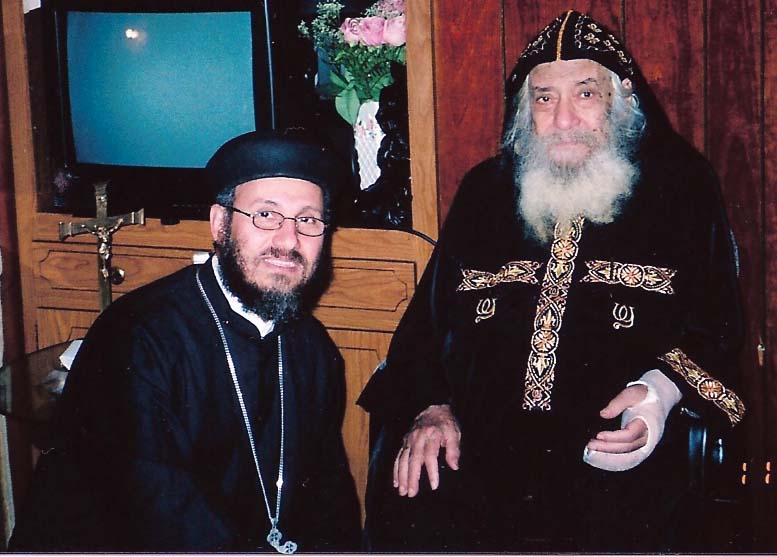 Fr. Arsanios was born in Shoubra, a suburb of Cairo, on March 21, 1961. He graduated from Ain-Shams Medical School in 1985 with a degree in Clinical Urology. He was ordained a priest in November of 1998. In June of 2006 Fr. Arsanios was transferred by H.H. Pope Shenouda III to the United States where he is currently serving the congregation of St. Mary in Seattle, WA.

Fr. Arsanios started his service in 1980 as an Agnostos, a reader, at the Church of St. George in Hadaye Shoubra. In the same year after finishing his servants’ preparation course, Fr. Arsanios became a Sunday school servant for the high school group. In 1981 Fr. Arsanios organized and started a permanent youth meeting. He also established and became the editor in chief for religious magazine titled "Roots."

In 1995, Fr. Arsanios was nominated for priesthood at the church of St. John in Helmyet el Zatoun. However he refused the nomination because he felt that priesthood required much preparation and studying. Nevertheless, his father of confession advised him to attend the school of Theology. Following the advice of his father of confession, Fr. Arsanios was enrolled at the school of theology in 1995.

Fr. Arsanios is greatly influenced by H.H. Pope Shenouda III. He feels that “every word by His Holiness is a curriculum for learning,” he remembers it and lives by it. Fr. Arsanios received “the love of the word, preaching, and individual service” from H.H. Pope Shenouda. Fr. Arsanios always remembers His Holiness’ word, "There are two ways. Either the priest struggles and the people are comforted, or the people struggle and the priest is comforted."